Surveillance Cameras... Why Not Put Them Where the Crime Is? 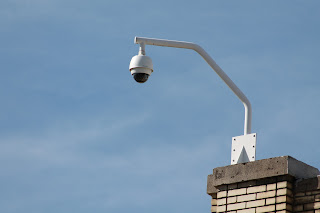 Thursday at the Public Safety and Infrastructure Committee City Council members got the next chapter in Police Chief Chuck Harmon's ongoing quest to keep surveillance cameras out of high crime areas.

The 15 cameras, garnered from the Republican National Convention Party in St. Pete, are being placed where it can be pretty much guaranteed they will see little if anything significant criminal activity.
The Police Chief's plan puts no cameras south of 5th Avenue South and that's  interesting because somewhere around two thirds of the City's major crime takes place south of 5th Avenue South.
When asked about putting the cameras in crime "hot" spots Harmon gave a typical evasive answer "how do you define a criminal hot spot"
After alluding in several previous answers to his vast experience, if the Police Chief cannot identify  the crime hot spots in St. Pete, why is he the police chief?
Here is some help Chief.
Walk to the door of your office. Turn left, go down the hall to the IT department.
Ask the guy who does the statistics for a crime scatter map. It will take him less that 15 minutes to show you where the high crime activity is. That's it. It's that simple.
If you as a citizen want pretty much that same information go to https://www.crimereports.com/.
In the SEARCH WINDOW put: St. Petersburg, Fl. Click Search.
On the INCIDENT LAYER TAB you can select crime types. Go down to the right of the box and uncheck sex offenders. It clutters up the map.
You can click on any of the bubbles for more information.
Now you tell me where would rational person wanting to affect crime in St. Pete  put the cameras. On Beach Drive or 22nd Avenue South?
Here are some suggestions:
·         Dr. MLK and 12th Avenue South
·         Dr MKL and 22nd Avenue South
·         28th Street South and 17th Avenue South
·         54 Avenue South and 28th Street
·         48th Street south and 13th Avenue South
With the a exception of Karl Nurse, who tossed a couple of soft balls, not a single City Council member would ask the obvious question, "why not put these things were the crime is?"
Harmon has the tools to analyze crime. He has several million dollars worth of software to do it.
He has a unit of light duty officers called the TRU unit who could monitor cameras in real time if he would only step up and use the resource.
He knows where the crime hot spots are and so do his Assistant Chiefs, Lieutenants and Majors.
Why not use these tools to fight crime rather than watch the party people and people at public events.
Answer: Harmon does not want any record of any  ongoing criminal activity that he can be held accountable for. Harmon is an accountability distributor, not a responsibility taker.
City Council has one more chance to get it right. When the PD comes back with the funding request to install these cameras, mostly downtown, they should reject it and tell the chief to come back with a plan that uses the cameras to fight crime in the City's high crime areas.
Once Harmon has these cameras installed in relatively benign areas, the argument to move them to high crime areas will always be it is too expensive.
Mayor,  the Chief never had any intentions of following through on your plan to use cameras to fight crime. He has stalled if off for 3 years. He will stall it off until you are gone or he retires.
Someone needs to start asking the Police Chief some tough questions.
e-mail Doc at: dr.webb@verizon.net, or send me a Facebook Friend request.