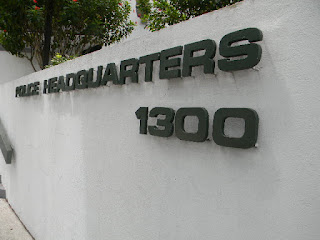 City Council and the Mayor are pretty good about starting things but not to good at following up.
Here are some lingering questions that need answers:
Several months back Chief Harmon told the PS&I City Council Subcommittee that the Armored Video Surveillance Unit to be built in a vehicle donated over 9 months ago would be available in July. Where is it?

Well part of the problem is the PD decided to have a "naming" contest so they can figure out what to call the thing. Good idea or just a delaying tactic. I'll let you decide.

While we're on the subject of video surveillance cameras, the PD was supposed to come up with a policy on where they would be located, who would monitor them and so on. Never mind the fact they have had a draft policy for over a year, no report yet.

What about the $250,000 or so in cameras from the RNC? Did anyone ever really figured out what they are going to do with those after the party?

Sticking with the PD, did anyone ever call or e-mail the Sheriff and ask him how much it would cost to have the Sheriff's call center dispatch the PD? Last time Wengay ask the question they all just ignored him. But the amount you're going to pay the City to cover the PD budget overage of $9 million or so is real. Either you'll pay a regressive fee/tax or a property tax increase, but no real serious effort to reduce cost.


While we're on a roll with the PD, that new building will have $2 to$4 million or more in costs associated with the communications center. Last time Mike Connors was asked for a cost estimate on that part of the project he said he didn't have the number but would get it. Anybody seen the figure?
Foster was supposed to bring a balanced budget to City Council in accordance with the last Charter amendments but he really didn't do that. He used the Police budget overage as a lever to get a fee/tax increase.
Mayor Foster should ring a few bells and get some answers. Good luck.
Council should throw out the fire fee/tax, forget any mileage increase hand the budget back to Mayor Foster and tell him to bring it back with no operational cuts at the PD.
E-mail Doc at dr.webb@verizon.net, or send me a Facebook Friend Request.
Posted by E. Eugene Webb PhD at 7:12 PM No comments:

The Gateway Project - Who Knew What When

The Gateway Project - Who Knew What When?

Then there is an interesting name, Rick Musset, that surfaced.

It is no stretch to say that Rick Musset is probably as close to a genius as anyone on the City staff. Beginning with the Dome and Bay Plaza right up to Bay Walk, Beach Drive, the downtown condo renaissance and the Shops at Bay Walk you will find Rick Musset's finger prints on virtually every major City development project in the last three plus decades.

Musset has an insatiable work ethic. A former City manager once told me, "Rick is my kind of guy. He is here when I get here, here when I leave, and usually answers his office phone on Saturday if I call". Musset was deeply trusted by two other notable deal makers: Rick Dodge and Rick Baker.

Serving City Mangers, strong Mayors and Councils since the 80s, save a brief stint up north, Musset has always been the consummate behind the scenes planner, problem solver and deal maker. In my experience the only people who knew what was going on are the people Mussett wanted to know and they only knew what Rick wanted them to know.

What is going on?

City staff is hobbled with a lack luster Mayor and a dysfunctional City Council. Right now my bet is most of the serious work is being done way behind the scenes. Staff can't trust the Mayor to keep his mouth shut about the deals in work, City Council is suffering from a serious case of talking too much, doing too little and ignoring the constituency. Curran, Council Chair, has lost any shred of public respect and provides no leadership. It is not particularly surprising they are not in the loop on anything big.

The fact that the entire elected City administration is not respected or trusted is evidenced by the fact the Darryl LeClair went to the County Commission about the Gateway project before coming to the St. Pete elected body.

It would be hard to believe that Musset would not be involved in something as big as this since the project would ultimately need a lot of City support. Musset is the principle deal maker and can string together a series seemingly impossible situations to make a deal work.

Musset plays Chess not Checkers. Curran has been around long enough to know that. When Rick Musset asks you to change something like a formal request from the Council Chair there is always more on the table than there is on the plate. Ask a few questions.

Just maybe if City Council and the Mayor listened to the people, paid more attention to the details and postured a little less, the serious people in the City with the ability to make things happen would include them.

They call that confidence.

e-mail Doc at dr.webb@verizon.net, or send me a Facebook Friend Request.

Baseball at Gateway a Good Idea or Not? 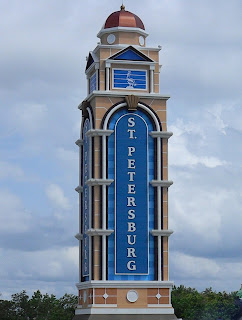 A new private (for the moment) plan to build a new stadium may be just the catalyst needed to get things off dead center. But is Gateway the Right place?
Scenario 1
You live in Pinellas County or Manatee County and work in Tampa. You are going to face a horrendous traffic nightmare every time the Rays play an evening home game. There are not enough roads and bridges to handle all of the traffic efficiently even if you use all three bridges as part of the equation. It would not seem possible to build an off ramp large enough to handle the stadium back up. Once again the Howard Franklin would become the "Car Strangled Spanner"

Scenario 2
A lot of the same people who ballyhoo the tourist industry as part of the Tampa Bay economy are deep in the stadium issue. Consider a family of four who have just flown into Tampa International on Friday arriving about 5:00PM, get a rental car and spend the next 2-3 hours on the Howard Franklin or Courtney Campbell Causeway trying to get to their hotel on the beach. Sounds like a set up for another of those "Least Friendly" awards.

Scenario 3
One of the really great things about this area is the Tampa International Airport and the ability to get to and from it for both tourist and business travelers. Placing a baseball stadium right in the middle of access to that benefit seems like an incredibly bad idea. If we want to continue to tout this area as a place for high tech business investment, good airport access is much more important than a baseball stadium.
And speaking of roads, just who will be picking up the tab for the massive exits, entrances, ramps and other road improvements required to support the Echelon plan. (Hint: go look in the mirror).

A stadium on the other side of the bridges where the it does not impact interstate rush hour commuter traffic flow and baseball traffic is generally using the lower volume side of the interstate system to get to the games seems like a much better all around approach.

For now it is an interesting conversation piece, but it's much more about finding a use for piece of Echelon property that has not developed as expected than it is about saving the Rays for St. Pete.
It might also be a good idea to go back and look at the City's box score in dealing with Echelon. I don't believe the City is leading in that series.

e-mail Doc at: dr.webb@verizon.net, or send me a Facebook Friend Request.