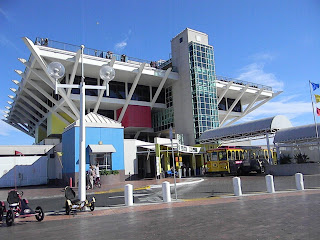 
"I really want that language (to reflect) the fact that we’re not just refurbishing, I want to clearly communicate that there is a demolishing and rebuilding part," Gerdes said. "(However), in the spirit of getting something accomplished, I'm willing to trust in the education process for the election to do that."
What education process? A few weeks of  hype from the City staff, the Chamber of Commerce and the Tampa Bay Times about the exorbitant cost to refurbish the Pier and the exotic benefits of the LENS with no mention of the costs to actually build the LENS out.
Gerdes' problem is he over thinks things. Leave the lawyer hat at home Charlie and listen to the people.
You have to give Curran high marks for intestinal fortitude and sticking to HER first love for the arts and LENS, but she gets an absolute failing grade when it comes to representing her constituency.
Danner would follow Curran over a cliff and that says all you need to know about him.
Does anyone really care what Jim Kennedy thinks or understand what he says? If so please comment below.
As for Kornell and Nurse, the song "Listen to Wind Blow " comes to mind.
Where's the Mayor? Working on baseball, this Pier/LENS thing is far too confusing.
Besides being outraged, citizens of St. Pete should be embarrassed by the spectacle on Monday where the elected thumb their collective noses at the electorate. Unfortunately, because of term limits, the electorate will never be able to tell those who need to hear it most how they really feel about them.
All of this however will pale compared to the staff and political scrambling that will come after the ballot language is approved.
Collectively, the administration and the Council will conclude, in a convoluted motion most likely by Jim Kennedy, that the feeble minded, uninformed, non art appreciating electorate was lead astray by a snake oil salesman from Palm Harbor and their collective decision cannot truly represent all that is good and wonderful for St. Pete. Therefore we must proceed with the LENS. Second by Curran.
Roll Call: 6 Yes, 1 No. (Hang in there Wengay)
The key to all of this is a big vote. If the Pier Referendum approval margin is not huge, then the City Council and the administration are simply going to ignore it.
So Plan to vote.
Posted by E. Eugene Webb PhD at 8:58 AM No comments:

I love NASCAR. I watch the races on TV, go to the tracks, I even driven on several of the super speedways.

Every wonder what fascinates guys about NASCAR?

Every since the 9th century when the Chinese invented gun powder, men have been fascinated about explosions. The sound, the power - fascinating as Spock would say.

What we have tried very successfully to do in auto racing is harness the power of an explosion and turn it into something useful - like motion.

If you go to Daytona for either of the two NASCAR races, the ground actually trembles on the starting lap. Now that's sound and fury.

I am one of those guys that routes the TV race sound thru the stereo, all 500 watts or so, and when they say crank it up -- I do. The Bose speakers leap to life.

The dogs hide, the bird puts her head under her wing, the wine glasses rattle. I think I have actually seen the curtains flutter.

Explosions at their absolute best. I love it!

This week there was a lot of press about electric cars. I think they are the wave of the future. We are one breakthrough away from the electric powered vehicle going viral as they say. It will either be in electric motor technology or battery science. There are literally thousands of researchers working on the problem as you read this.

What happens to NASCAR when cars go electric?

No explosions. No sound, no fury, no ground trembling just silence or a soft whoooosh as they blow by at 200MPH.

To get a feel for how all of this might work, during this weeks race, I set up a large fan, cranked up the stereo and then simply pushed MUTE and turned on the fan.

The silence was deafening. Even my Coors Light didn't look as inviting

I can't imagine what it would be like in the grandstands. You would actually have to talk to the person next to you because you could hear them.

NASCAR needs to start a research program on a noisy electric motor because without the sound and the fury, it just won't be NASCAR.

e-mail Doc at: dr.webb@verizon.net , or send me a Facebook Friend request at Gene Webb

Where Will the Artists Go? 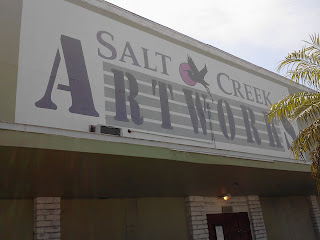 Salt Creek Art Works is closing soon. Salt Creek Artworks provides studios and galleries for "struggling" local artists. Some of them have been struggling there for a lot of years.

The Tampa Bay Times reported the property has been sold and will be converted into a parking lot for the fish processing plant next door.

Probably some irony in all of that.

Hum the tune: They "Paved Paradise and Put Up a Parking Lot"

There is a lot of history in this place. Once the Perma House Furniture store, ART WORKS has been on 4th street South for 20 years or so. I have been to a number of art shows and fund raisers there, it is about what you would expect an art studio/gallery to be, comfortable, interesting and full of fascinating people.

The big question is: Now what?

Will the St. Petersburg arts community, so fond of itself and its accomplishments, promoter of St. Petersburg as an arts destination, step up and find a new location for this important art center, or will they come running to City Council for a hand out to help the starving artists.

With the arts community never reluctant to dip into the public trough, look for the latter.
It's time for Chihuly, the people who operate the Dali and some of the other more successful art operations in town to step up and help their struggling brethren.

The City can help with zoning and permitting to make a relocation easier.

With Mayor Foster looking at a $13 million dollar budget short fall, thinking about raising taxes and creating convoluted fees, it's time for the arts to help the artists.

e-mail doc at: dr.webb@verizon.net, or send me a friend request on Facebook
Posted by E. Eugene Webb PhD at 9:08 PM No comments: