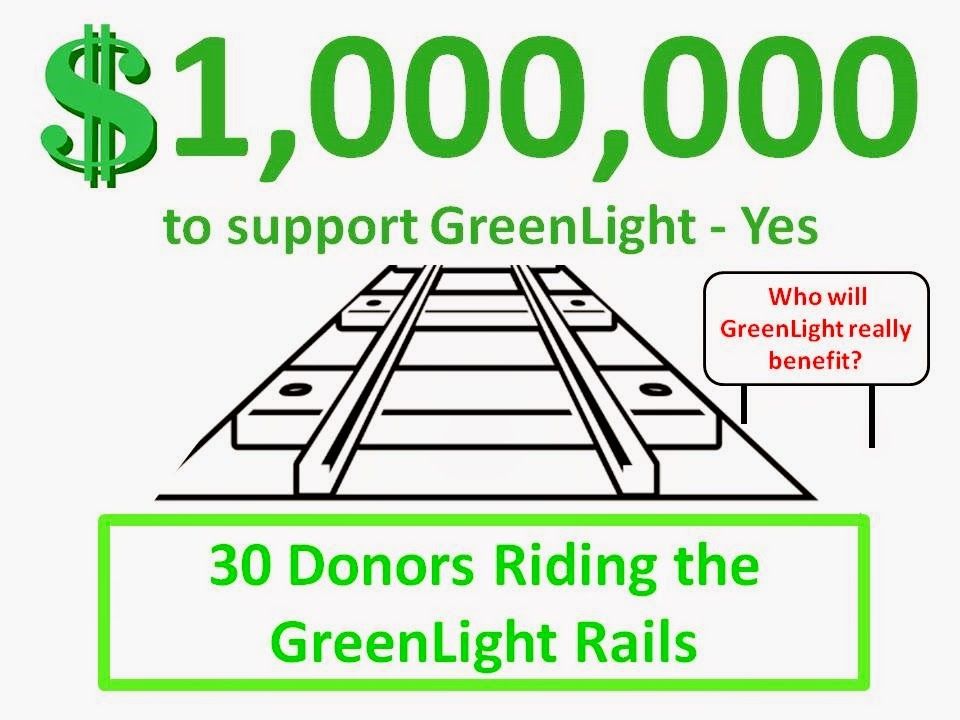 In the recent financial filings regarding campaign contributions, GreenLight Pinellas has received almost $1 million from about 30 donors. You can see the campaign finance reports here Pinellas County Supervisor of Elections.

If there was any question in your mind about who is driving the "train" and what their motives are, it should now be crystal clear.

Yes for Greenlight campaign manager Joe Ferrell said "donations from hospitals, finance firms, IT companies, the Rays and utilities are evidence that the private sector sees developing mass transit as a priority."

Not so much a "priority" as a business opportunity or a political necessity.

If buses were the priority then GreenLight might make some sense, but nowhere in the Ordinance you are being asked to make a law, are the buses first in line for funding.

If the train were a real public transportation priority then it would go where the 2% who might use it live and not where the 1% who wouldn't be caught dead on a train live in their million dollar condos.

The train is passing through business parks, malls and other prime Pinellas County real-estate.

The big dollar players know where this project is going and they just ponyed up almost one million dollars to get their fingers in the pie.

The filling in that pie is your tax dollars.

The developers, train manufacturers, financial institutions, technology companies are throwing big dollars into the Yes for Greenlight till. This kind of money doesn't come with strings attached, it comes with chains attached.

After the smoke clears, should the sales tax referendum pass, just who do you think will really be calling the shots? It sure won't be the taxpayers.

GreenLight and this Tax referendum are bad for all Pinellas County tax payers and our visitors.

There is a solution to all of this. It's called YOUR VOTE.

They can buy all the ads, fill the airways, and stuff your mailbox until it falls over, but don't let them buy your vote.

Watch My Video Green Light - It's a Bad Law before you vote.
E-mail Doc at: dr.webb@verizon.net. Or send me a Facebook (Gene Webb) Friend request. Please comment below, and be sure to share on Facebook and Twitter.
Disclosures: Contributor to No Tax for Tracks.
Posted by Gene Webb at 5:00 AM No comments:

You can stop the GreenLight Train Wreck 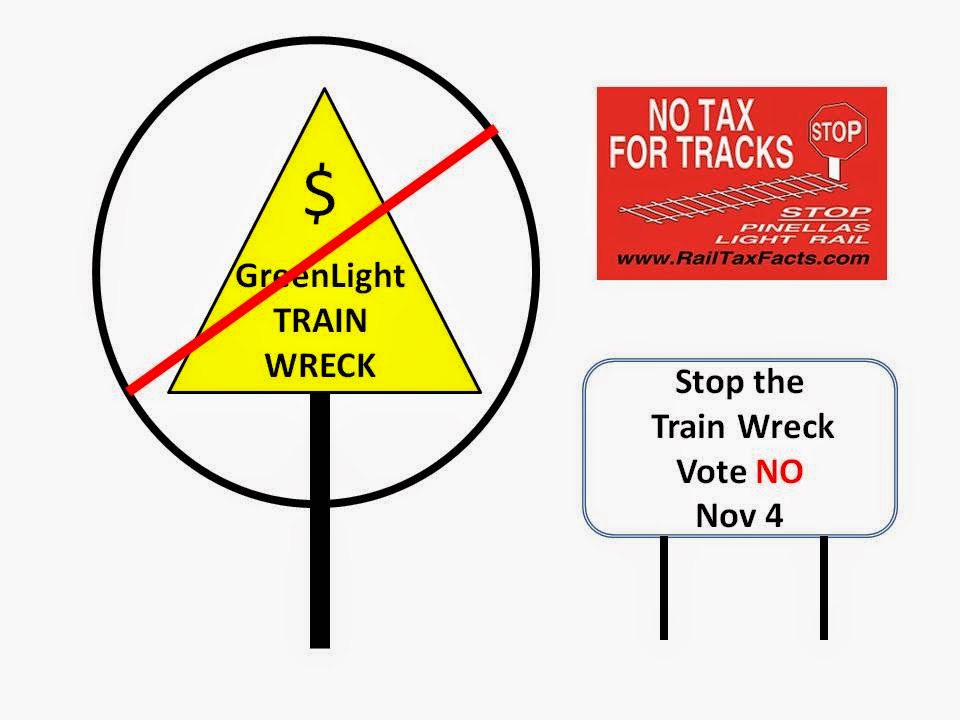 Tuesday those of you who have not yet voted will go to the polls and vote on some very important races and issues.

None is more important than the Pinellas County Sales Tax referendum question. It is the last item ON THE BACK of the Ballot

It Reads like this:
Levy of Countywide One Percent Sales Surtax to Fund Greenlight Pinellas Plan for Public Transit.
Summary: Shall the improvement, construction, operation, maintenance and financing of public transit benefiting Pinellas County, including an expanded bus system with bus rapid transit, increased frequency and extended hours, local passenger rail and regional connections be funded by levying a one percent sales surtax from January 1, 2016 until repealed, with the proceeds deposited in a dedicated trust fund?

If you vote yes you put an additional $100 Million annually into the PSTA coffers.

Over the last few months the PSTA administration has been investigated for electioneering, misused federal homeland security funds, lied to the public and spread misleading information about the train they want to build and its intended purpose.

They have stone walled public records requests, refused to answer direct questions and berated those who would question their actions and motives.

Just over 30 people have donated almost all of the $1 million raised to support the passage of this tax. They all expect to get their money back and then some, and the tactics of the current PSTA Administration and complete lack of oversight by the Board of Directors makes it a real good bet.

This sales tax referendum was never about public transportation, although I believe that there are some on the PSTA Board that still believe it is. It was always about a train that requires property and right of way acquisition for track and stations and the redevelopment around the stations and the rail line.

The inability of the Board to control the PSTA Administration is evident the actions of its CEO.

If he is not concerned about misusing and directing his staff to misuse federal funds why would we expect anything less when the sales tax dollars start rolling in?

Don't pay more for virtually everything you buy so the PSTA can repay the political cronies that supported GreenLight and waste the money on a train that does not serve those who actually use public transportation.

Don't put this County in to debt for up to 90 years that you as a citizen cannot control and those who represent you won't control.

Right now you are in the driver's seat.  You can stop this train wreck before it happens.

You can vote NO

Watch My Video Green Light - It's a Bad Law before you vote.
E-mail Doc at: dr.webb@verizon.net. Or send me a Facebook (Gene Webb) Friend request. Please comment below, and be sure to share on Facebook and Twitter.
Disclosures: Contributor to No Tax for Tracks.
Posted by Gene Webb at 5:00 AM No comments: 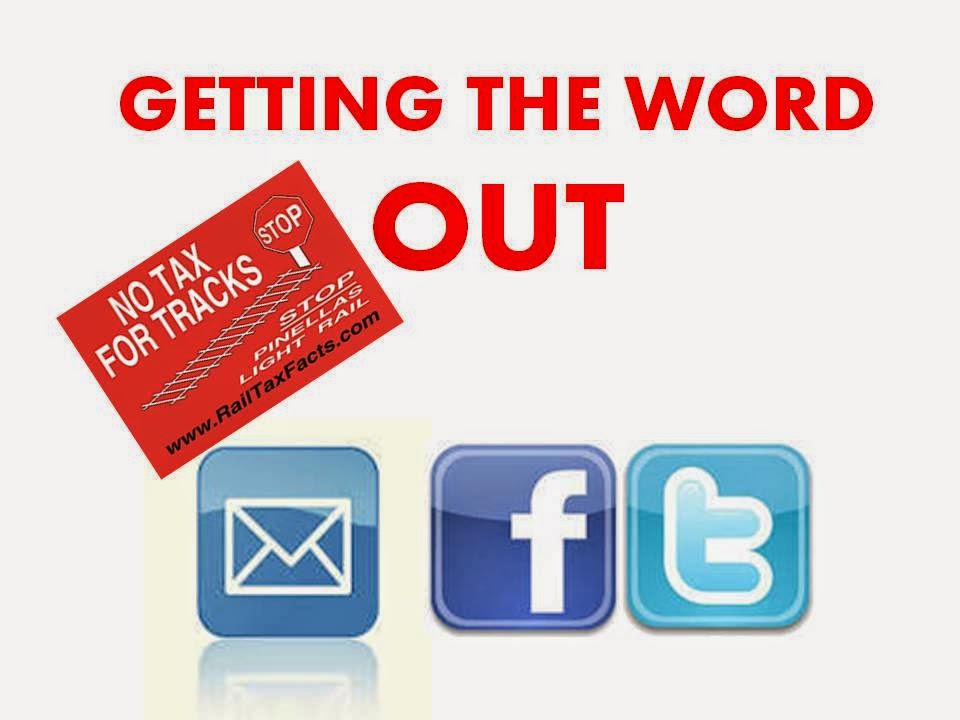 A majority of people when they hear the facts about GreenLight decide that it is a bad deal for Pinellas County and indicate they will vote NO.

The problem is the only serious effort to get the facts out is taking place right here where you're reading... Social Media.

Big news organizations are reluctant to go against powerful advertisers like the Board of Realtors, and the Chamber of Commerce with all their members. Big media needs the ad revenue.

Quite frankly No Tax for Tracks is out gunned in the money department by several folds.

The Polls consistently tell the story. As pollsters ask more detailed questions about the sales tax increase, reluctance turns in to opposition.

So here is what you can do.

Up there in the picture are three icons that are the key to getting the word out.

Somewhere on every Blog page and on-line newspaper article are a series of boxes with those ICONs. If you click the one that looks like an envelope you can mail the post your reading to up to five e-mail addresses. So every time you see something about the sales tax that you think is good information, click the e-mail envelope and send it to 5 friends.

You can click the envelope and send to as many groups of 5 as you want.

While you're at it, ask your e-mail contacts to forward the post to five of their friends. That will spread the word.

Give it a try.

Help save this County from the biggest tax grab boondoggle in Pinellas County History.

Vote NO on the sales tax referendum

The Lawfest Workshop, conceived by Ms. Lassiter, is an event designed specifically to get people who need legal services or advice directly in touch with local attorneys.

The event was packed when I got there about noon and there were numerous rooms at the Midtown St. Petersburg College Campus full of attorneys and people with real questions.

There were a lot of helpful people on hand to make sure visitors found the right attorney for their questions.

While I was there, former Mayor Bill Foster was answering questions about estate planning and current City Council member Charlie Gerdes was offering some legal advice.

I have been to a number of these events and it is always a moving experience to see attorneys from the community helping people who might not otherwise seek out legal advice.

All the services are free.

The Lawfest Workshop is a very personal one on one event and is best told in pictures.